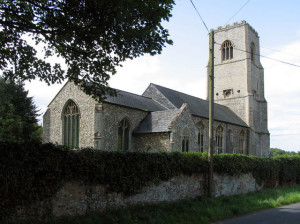 Holy Trinity church sits alongside the main road through the village. The church shows some very old architecture for a Norfolk church namely features which are Norman. The predominant architecture, however, is typical for Norfolk namely in the Perpendicular style of the 15th century. In common with other Norfolk churches there is much also which changed as a result of the Victorian enthusiasm for modernisation and restoration. A typical west Norfolk feature is the use of carrstone (a soft umber-yellow sandstone found in this area) which lends it a pleasant glow in evening sunshine.

On the north side of the nave is a grand Norman doorway of a style which Sam Mortlock observed is found only once elsewhere in Norfolk, on the north transept of Norwich Cathedral.

Otherwise, the church is largely a result of the local farming wealth of the 14th and 15th centuries, and you step into an interior which still speaks of that period. The arcade which separates the nave from the south aisle is from towards the end of this period, while the font is a fairly spectacular example of the early 14th Century, its panels depicting a variety of Decorated tracery.

On the other side of the great Reformation divide is one of Norfolk’s best sets of James I royal arms, curiously placed inside the north wall of the tower, where many people must miss it.

There is a most curious sight at the east end of the south aisle. As the Tudor period ended, and the puritans began their rise to power under the early Stuart kings, there is a rapid deterioration in the quality and style of English memorials, a result perhaps of puritan suspicion of the vanity of art and education. In 1604, John Steward and his wife were buried here under what looks like half of a fairly monstrous six-poster bed, their sleeping effigies watched over by a maudlin lion and garishly recoloured in recent years.

One of those 19th Century worthies, Henry Villebois, was thought of highly enough for a memorial to be placed behind the pulpit to him by the great Richard Westmacott, a sculptor best known for his frieze on the front of the British Museum in London. Two angels rest in contemplation in front of the inscription. Mortlock was uncharacteristically harsh about Westmacott’s work, observing that it is competent but uninspired. In truth, this memorial might seem more impressive if it was not so awkwardly placed.

Outside, well-carved and substantial Victorian gravestones kept a kind of contemplation of their own