The site of the Abbey for Cistercian Nuns, to the west of the parish church, has considerable earthworks of grass-covered building outlines including the claustral range and at least two other separate groups. Standing masonry within the gardens of Abbey House represent the south wall of the church and outer parlour. An incomplete ditched enclosure with a probable inlet channel to the north, has within it, a depression thought to have been a fishpond. Other mainly linear features may well be contemporary, including possible former precinct/roadside boundary banks and ditches along the southern edge. 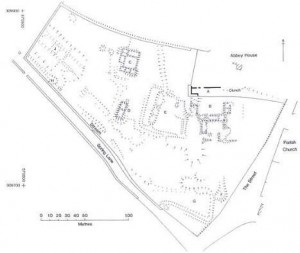 The standing masonry is considered to be the south wall of the nave of the church with three sides of an outer parlour adjoining to the west. The nave wall has two complete circular windows, one quatrefoil ~ the other sexfoil,with the remnants of another at the eastern end of the wall. 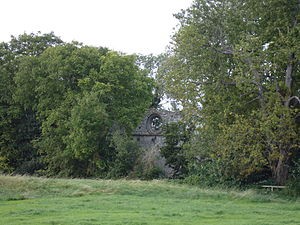 Medieval brick quoins are noted on the buttress at the NW corner and at the western end of the longest E-W length, presumably indicating an archway; whilst a clunch outcrop at ground level to the east of the upstanding masonry seems to relate to a wall alignment to the south.

Another small area of clunch is noted where a garden path crosses the western end of a low bank to the east, possibly indicating a wall alignment, although no masonry evidence is otherwise noted.

Corbels and mitres on the south side of the wall indicate the height of the cloister roof and in grassland to the south, is a group of grass-covered building outlines, up to 1m high, which delineate the extent of the claustral range. This had an inner courtyard of 32m square, with the ranges to the east and west having a width of 6.5m and the southern range, a width of 5.5m. The outlines have few lengths of surface masonry, flint and clunch (where visible), whilst further (less complete) outlines are noted adjoining to the south. The undulations on two SW facing corners are indicative of buttresses.

Two other significant building outlines are recorded, with the larger possibly being a U-shaped complex, open, except for a wall, to the east. A rather odd group of three projecting walls are positioned at the northern end of the west range, but these may be incomplete. An irregular mound to the west may include masonry, but it is not a convincing building outline in its present form.

Slight banks and ditches are noted between an 18m by 7m subdivided building outline to the south, which has grass-covered masonry up to 1.5m high, including a few medieval bricks.

The linear features may be remnants of enclosures or subdivisions within the precinct, but they are too fragmentary to ascertain their layout.

The most convincing of the pure earthwork complexes is the incomplete ditched enclosure up to 0.6m deep with a shallower channel joining the northern arm. From the present ground levels, this appears to be an inlet channel. The NE corner of the enclosure disturbs the symmetry with a spur of land projecting from the claustral range. This is c. 1.5m higher than the general enclosure interior and alters the form of the ditches. The eastern arm broadens here, with an interior bank for its length to the south. The eastern end of the northern arm is incomplete, again with an internal bank along part of its length.

Internal to the enclosure, is a N-S depression, up to 0.9m deep and with two subdivisions which suggest a fishpond complex. It is probably fed from the north, opposite where the inlet channel joins, although this area is not totally regular in form. Another link to the outer ditch probably existed at the southern end.

Not unexpectedly, the buildings are situated on the highest ground of the site, with an irregular slope southwards. This plan gives some indication of what may well be mostly natural undulations to the south of the above mentioned areas, extending to what are more obvious, but fragmented, linear features nearer the road.

At the east of the site is an obvious extraction pit, probably for clunch, with a link into a depression which is part of the boundary of an incomplete enclosure.  The eastern and southern arms are the most convincing, although their junction may have been disturbed by road improvements, which altered the field boundary to its present position. Certainly, the flat-topped bank, which is to the south of the southern arm, appears to be truncated by the scarp of the eastern boundary.

The southern arm seems to be the wettest part of the site, suggesting that surface water has been channelled into it, or that it is spring fed. Springs are noted on early Ordnance Survey maps to the south, hence the road name. The western part of the northern arm is a rather less defined depression, shallow and more like a natural watercourse.

Pre-war Ordnance Survey maps show a sheepwash to the SE of a sluice of which a short length of brick wall is the most obvious remaining evidence. The ditch that is shown to the NW, parallel to the road, may, in part, be an outflow from the sheepwash, but again could be a remnant of a former roadside boundary.

The remaining area of note is to the north on the lowest part of the site. An 8m square low (0.2m) platform is located between two shallow NW-SE ditches, themselves draining a basin that appears bounded by at least partly natural slopes.

A low scarp and bank 20m to the SE, straddles the basin forming a low, but distinct barrier cut by ditches. The form of the platform does suggest a building, but there is no masonry on the surface to confirm this possible interpretation.

Other slight, very irregular amorphous undulations within this western third of the site exist, but only those which seem to have linear extent or definite shape have been recorded. As noted elsewhere, most of these features are fragmentary making an overall pattern impossible to determine. Many excellent air photographs of the site with prefix TF7009 are in the NLA collection at Gressenhall